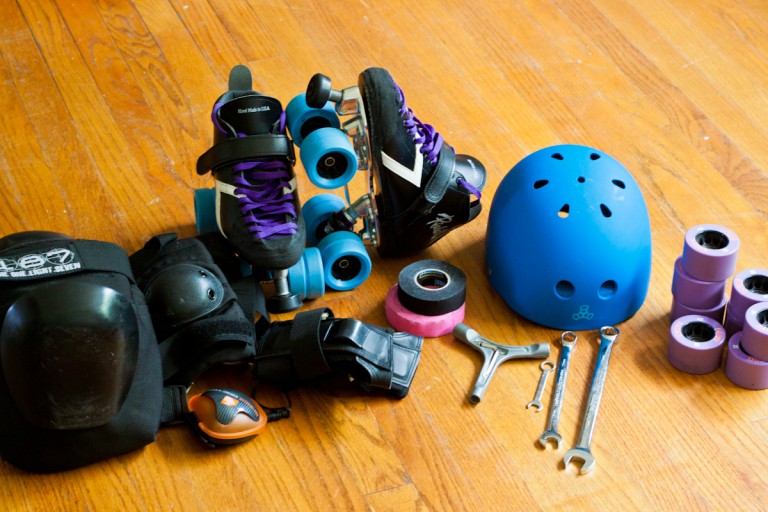 On a cold December Monday right before Christmas, I rushed to get to practice after work. When I got to the meeting place, I didn’t see any other vehicles parked out front. I worried that I had missed a memo or practice had been canceled. As soon as I parked and stepped out of the car, the side door to the warehouse opened and my coach stepped outside into the cold night air.

“Looks like you are the only one here,” she said.

I began to backpedal. “Oh, you don’t have to stay for just me.”

Her response was quick, “Do you want to practice?”

Still retreating but trying to be honest, I repeated, “Well yes, but you don’t have to stay for just me.”

She paused a beat, quirking her lips. Then she looked at me dead on and said, “Get your gear.” She turned and walked inside.

I scrambled to get my gear and followed her.

Roller derby women are some of the toughest women I know in mind and body. It was easy for me to lean into my feelings of not belonging, of being an imposition, and of feeling like the space wasn’t mine to be in. My Coach jumped past that argument, assumed my right to be there, and moved me toward action.

It was one of the best practices I ever had. The one-on-one attention accelerated my learning curve at a crucial moment when I was eager but before Derby was sticky to me. More than that, I began to understand that I belonged and that I was expected to show up and take my place.

If you are trying to be a leader but you doubt your place, you are reading this. And you belong here.

This site uses Akismet to reduce spam. Learn how your comment data is processed.