My grandfather was a Seabee in the Korean War. When I was eleven, we were on a long car trip together wandering dirt roads in farmland Oklahoma. He told me the one rule and phrase that got him where he wanted was, “I Volunteer”.

“Didn’t you get a lot of assignments you didn’t want though?” I asked. He smiled. “Yes, at first. I cleaned a few latrines. But I worked hard and did it well. When my commanding officers saw that I would volunteer and do the work, they started making sure I was in the path of more desirable work. I learned new things, and they paid attention to my interest.”

It seemed like an unreasonable idea to me. My curiosity got the better of me though, so I tried.

“We need someone to work the closing shift.”

“We need someone to be on the escalation line.”

“We need someone to take on this messy and difficult project.”

The opportunities grew my experience quickly. I got to interact with decision makers and players I would have otherwise never met. I made friends, some of them lifelong. I found people who would champion me. “I volunteer” led to my first major promotion.

I cleaned my share of latrines along the way. I got taken advantage of. Other people took credit for my hard work. But on balance, “I volunteer” has paid out. It’s a bet I’ll still take today.

“We have a project that…”

I don’t need to hear the rest.

I sat beside my six year old son in his hospital bed. It was 2 am. He was wide awake. From his perspective, the day had been a long nap followed by the euphoria of pain medication. He was hungry. Twenty-Four hours since he had anything substantial. But with digestion still on hold from the anesthesia, he was only allowed Sprite.

My son has never been one for moderation when sugar is involved. He kept slamming back the Sprite as fast as he could get the nurses to bring it. His third glass in, the nurse slowed him down. I knew something wasn’t right. His little belly was distended. Giving him fluid had not started his system processing again as hoped. I held his hand as he went from giddy to woozy.

And then, he erupted. I’ll spare you the worst of the details. Let’s just say I had no idea how much would fit in a six year old’s stomach. I grabbed the nearby trash can to try to hold back my little Mt. Vesuvius. It did little good. His bed, his gown, his mom… we were all victims of  pyroclastic Sprite spewing from his belly..

And now, finished with the event, he looked up at me. It was the briefest of moments in which the volume of questions on his face matched the volume of destruction in the room.

“Did I do something wrong?”

All translating to the one question his six year old self needed help with.

“Mom, what story do I tell about what just happened.”

I smiled. “Wow, you just made a Sprite Volcano!” He laughed. I laughed with him as I began cleaning him up. He mimed the performance again for the nurse who came to help. Over the next three days it was the story he recounted for everyone who visited him. Not a story of pain, or of fear, but one of Sprite everywhere.

Things happen in life. But we don’t live in discreet objective facts. We live in the stories we tell ourselves and each other. Stories help us make the meaning. Stories help us remember what we shouldn’t forget. How we tell the story matters.

For the challenges happening in your life right now, tell the story to yourself again. Only this time, you’re the hero. You’re the one on the journey. You’re the chosen one. You won’t believe it at first. You’ll slip back into “yeah buts” and negative self talk. That’s okay. It’s part of the story. The part where the hero loses hope.

But now, you get that second wind. You find the deeper truth inside you. You turn the tide. This is your story. You get to tell it. The facts are the facts. But the story is everything else.

How you tell the story matters. My son is 14 now. He works to become an adult, and to write his own stories. But still, I can smile at him and say “Sprite Volcano” and we laugh at the story again. 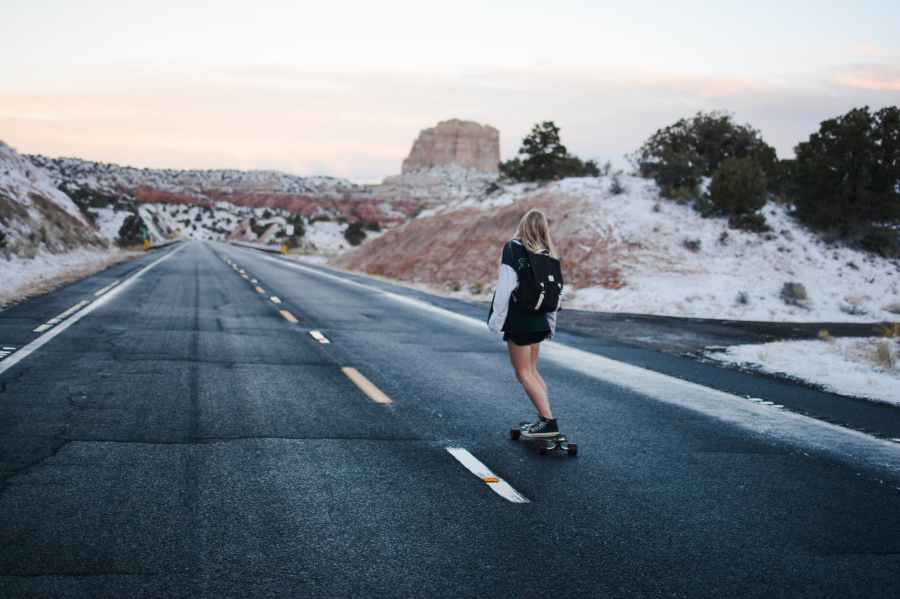 I’m on my longboard and for the first time, I can slow my pace by cutting hard back and forth. The graceful symbols I draw as I coast down the hill are the very essence of flow. I feel powerful. I look beautiful. I’m a 40+ year old woman. I’m not “supposed” to be able to do this.  People see what I do and ask in disbelief, “How do you do that?”

You didn’t see the time I was cruising on my board, and saw the pothole. An error in my path finding, I couldn’t avoid it. It was going to stop my board. A heartbeat set aside for the recitation I learned from my falls in Roller Derby, and my long ago study of Judo. “Pads down first, let them take the blow. Tuck your head. Roll.” Now it’s time. Just like the plan, the pads take the brunt of it. The asphalt takes is cut, a little from my elbow, and a bruise to remember this moment by on my hip. I got back up.

In the pursuit of the hustle, people say you’re only as good as your last success.
But that’s not right. Successes are great experiences. But failures are our educators.
You are only as good as the last time you failed.

The last time you failed a test, didn’t get backing for a project, got shut down in a meeting, bombed a presentation… these are all parts of the success you will inevitably achieve. Just as long as you keep getting back up.

It’s easy to see the success of others, even your own success as that spotlight moment. But that’s the refrain of the song, pleasant, but meaningless on its own.

What was the last thing you failed at? What was it in pursuit of? Right now it may hurt. You learned.